On the 19th of October 2015 Energinet.dk suffered a fault on the 42 kilometer long Export Cable connecting Horns Rev 2 Offshore Windfarm to the landfall at Henne Strand. After weeks with continuous bad weather JD-Contractor together with jointers from Nexans completed the repair late in the evening of 17th of December allowing for the Windfarm to go back in operation.
The fault occurred in the afternoon on the 19th of October 2015, and was initially located to be at a position approx. 800 m from the Offshore Platform. Two days later on the 21st of October a meeting was held between Energinet.dk and JD-Contractor, where a draft coordinated plan for the cable repair operation was discussed and agreed resulting in one of our diving vessels sailing from port the same evening.
Hence, Energinet.dk contracted JD-Contractor to mobilize a cable repair spread, as well as supporting vessels to undertake survey, free laying of cable, cutting and clearing of damaged cable section. Nexans was contracted to mobilize equipment and personnel for the offshore jointing operations to be carried out from the JD-Contractor cable repair spread.
Since the fault was located very near a bight on the cable, JD-Contractor together with Energinet.dk engineered a one joint solution. This involved de-burial and relocation of approx. 700 m of cable allowing for the cable to be recovered in one piece, so that the damaged section could be cut out on the vessel and one joint inserted.
The scope of work was successfully completed in accordance with the developed RAMS, resulting in a fast and efficient cable repair operation with focus on minimizing weather windows required due to the harsh weather conditions, as well as high focus on safety during the operations.
Despite extremely bad weather conditions with several storms with gusts of wind of hurricane speed it was managed to get the Horns Rev 2 windfarm back in service before Christmas. This was due to very quick responses, innovative engineering and good cooperation between all participating parties.
Good cooperation between Energinet.dk, JD-Contractor, Nexans and the MWS proofed to be a successfully combination for the completion of the cable repair despite extremely challenging weather conditions. 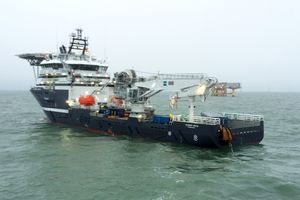 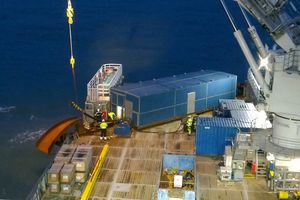