While working on the installation of two chemical pipes in Dakar Senegal, JD-Contractor was approached by the vessel owner to assist with the Emergency towing of the distressed vessel. The vessel Nofit had on the 5th of January 2018 experienced a very serious fire on board which had caused substantial damage to the accommodation and bridge decks. Luckily, the vessel crew was unharmed, and they managed to put out the fire themselves and ensure that the hull and cargo was undamaged. The crew had arranged shelter for themselves in a liferaft on the forecastle and had also managed to gather food before the accommodation burned out.

Although being currently occupied on a project in Dakar, JD-Contractor decided to release Tug Bauge from the project on the 6th of January and proceed towards the last known position of “Nofit” approximately 200 nautical miles south of Dakar. Even though ‘Nofit’ was adrift and only an estimated position of the vessel was known, the crew on board  Bauge managed to locate ‘Nofit’ and connect with the vessel and make it ready for the emergency tow back to Dakar.
On the first day of the tow, up to 3 m waves and swell was experienced and despite wind and current against the tow, Bauge with Nofit on tow reached Dakar in the morning of the 10th of January.
After a couple of tense days, the crew from “Nofit” could safely disembark in Dakar, and Bauge could re-commence its part in the ongoing JD-Contractor project. 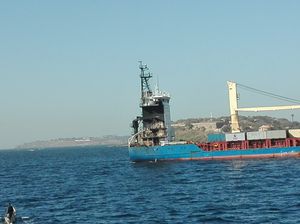 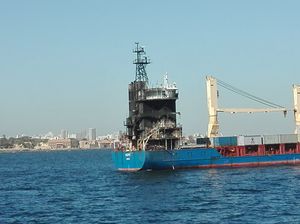 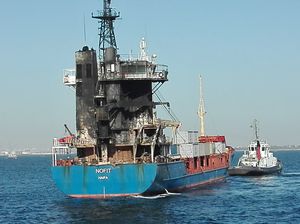