On the 8th of January one of the 400 kV cables between Denmark and Sweden was taken out of service due to oil leakage from the cable. The 35-year-old cable uses a special oil as part of the cable insulation. The oil is very thin and dissolves over time but still should not be present in the marine environment. Therefore, Energinet immediately contacted JD-Contractor under the framework agreement in relation to contingency repairs of all subsea cables in Denmark. JD-Contractor swiftly deployed several vessels including diving vessels Cable One and Honte to locate and find the leak with divers.

The cable was repeatedly lifted from the seabed up on-board H.P Lading, where a part of the cable was frozen so that the oil inside the cable would freeze that way making a temporary ice “plug”. Using this method, it could be asserted on which side of the frozen “plug” the oil leak was seeping, as the oil pressure would drop on the leaking side. Slowly after several freezes, the fault was finally located 1.32 kilometres from the Danish Coast at a depth of approximately 26 metres of water.

The cause of the cable fault will be investigated in the laboratory. In addition to JD-Contractors Cable Barge Henry P Lading and the diving vessels Cable One and Honte, also JD-Contractors three tugs Bauge, Naja and Lillebjørn were supporting the fault localisation and repair operation.

Once again having a Framework Agreement in place, so that engineering, planning and execution could be initiated instantly, allowed Energinet to commence a repair only a day after the fault was registered. As many times before, good cooperation between Energinet, JD-Contractor, NKT and Survey Association once again proved to be a successful combination for the completion of a cable repair. 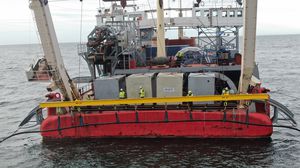 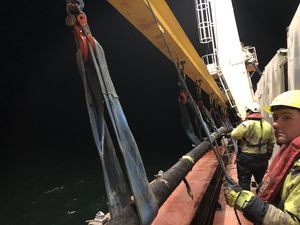 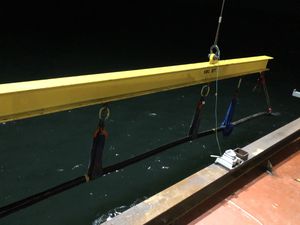